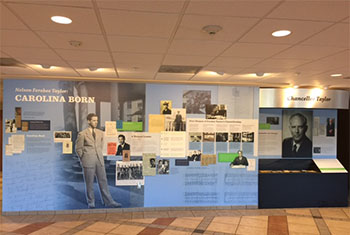 Family and friends of former UNC Chancellor Nelson Ferebee Taylor gathered on Friday, Nov. 18 to honor the late chancellor as they unveiled an exhibit in his honor. The exhibit, is located in the residence hall also named for the chancellor, highlights key milestones from Taylor’s life before, during and after his tenure as chancellor.  One of the pictures featured Glenn Williams who was featured playing a banjo on the night he and Taylor spent the night in Hinton James Residence Hall in response to students requests for air conditioning in the halls.

Don Boulton, former UNC Vice Chancellor for Student Affairs who was hired by and worked with Taylor, shared memories of their time together working at UNC. Vice Chancellor Winston Crisp and Department of Housing and Residential Education Director Allen Blattner also provided remarks at the event attended my more than 60 people including students.

The former Cary C. Boshamer professor of law and chancellor from 1972-1980 made significant improvements in the university’s libraries and worked to expand UNC’s endowment. His administration was marked by substantial building on campus and he was honored for service to the university with the William R. Davie Award, the highest award given by the UNC Board of Trustees.